In my red State, there are several blue counties. I happen to live in one of these, and our chief commissioner issued a stay-at-home order on March 25, 2020. On the same day, the county health department determined there were too few coronavirus test kits, and the intensive care is full.

On March 26, 2020, the mayor of the county seat followed suit issuing a” Stay at Home” executive order. The other nearby blue county-has a blue city in it. You may know of this city, as it is home to the world’s busiest airport and the state capitol. The mayor there issued a stay-at-home order on March 24, 2020. She also made the decision based on health officials’ warnings. They said being too close, and in constant contact with others would increase the duration and deaths in this pandemic.

So, why the State’s governor allegedly told the press yesterday, he didn’t know asymptomatic carriers could spread the novel coronavirus is baffling. The virus, experts say, causes COVID-19. Oh, did I mention my State is also home to the headquarters of the Centers for Disease Control and Prevention? Yes, the CDC and the governor are in the same State. So, for the governor to be clueless about the ways the coronavirus spreads was a bit confusing. Especially since on Saturday, March 14, 2020, the Governor signed a “public health state of emergency,” which outlined why this virus is dangerous.

Well, maybe, he wasn’t clueless. Perhaps the governor was referring to the CDC’s April 2 report regarding presymptomatic transmission when he mentioned:

In an early release, the CDC reported on the presymptomatic transmission. The report, dated April 2, 2020, indicates the newly infected person can pass on the coronavirus before they exhibit the first symptom.

Asymptomatic means the infected may never show signs of infection at any stage of the disease.

Presymptomatic means the newly infected hasn’t exhibited any signs yet. Eventually, the infected will experience symptoms.

The CDC released the presymptomatic report within those 24-hours the governor referenced. Whether it was the slip of the tongue or ignorance, the governor still made the call to announce the state-ordered Shelter-in-Place protocol. The order is in effect beginning at 6 pm April 3 until April 13, 2020. Consequently, the latter is the same end date on the March 14 public health emergency declaration.

So maybe what’s giving me pause, is why the news media focused their reporting on what he allegedly mentioned and NOT his action.

Sensationalism to get high ratings is one of the many things I didn’t like about broadcast news and, I refused to play that role while reporting. I didn’t believe in destroying someone’s reputation to get ratings. Controversy and character assassination take the focus off what matters to the public.

As a news reporter, I had to fact-check my stories before broadcasting. I also had to use primary sources whenever possible. This is especially true of mainstream news media. Journalists research or at least they are supposed to find facts. Not going to other media sources for information but getting it right from the horse’s mouth, so to speak.

Therefore, before running with that story, a conscientious reporter could’ve asked for clarification. Of course, it means taking the chance of not being first.

Still, fast and wrong is wrong.

And wrong, in this case, meant they missed the plot twist that the Newly INFECTED can pass on the virus before they exhibit their first symptom.

We can spread this potentially fatal virus as presymptomatic, asymptomatic, and symptomatic carriers. And this new information brings us to today’s protocol of wearing masks when in public.

So, don’t let the news media use legerdemain, on you, to fatten their bottom line. The governor’s “I didn’t know” was a titillating talking point. Still, once you fact-checked his assumption against his actions, you quickly realized his response was in direct opposition to his actions.

Ergo the reporting wasn’t “fake,” but in their haste to get a provocative news angle, they missed an opportunity to update this still-developing story.

So how can we, the public, get the story when news reporting goes off the rails? Well, we can focus on what is vital to our health and safety, especially when the news media wants us to look elsewhere.

Now, back to the governor whose possible misquote landed him and his 2018 gubernatorial democratic opponent as a top trending topic on twitter Thursday into Friday.

He also held the frontpage headline of every primary news website. If I were his press secretary, I’d take the loss. His blunder turned into a big win for the State of Georgia. For a short time, we had the nation’s attention.

According to Patch News, we have more than 1000 residents hospitalized. In my county, as of Tuesday, March 31, 2020, we’ve had three reported deaths and 66 cases related to COVID-19. For our health and well-being, we’re on lockdown until after Easter Sunday.

In today’s climate, not looking out for your interest could be a matter of life or death. Don’t let the news media or politicians play you for your attention. You have the power at your fingertips.

Be Safe, Be Well.

Question of the day. Is it just me, or have you taken an unusual interest in UFO documentaries during this stay at home period?

Less than 10% percent of Americans interviewed in The Chapman University Survey of American Fears 1 2015 admitted they’re afraid of the dark.   The California university study found that adults have traded in the childhood phobia for fears of political corruption and technology. 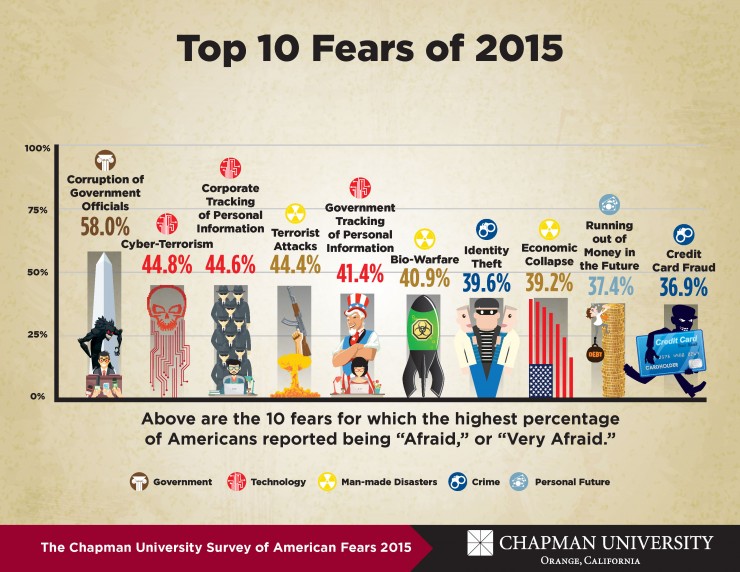 In fact, if you find yourself on the game show, “Family Feud” – here are the top three answers to what Americans say they fear.

So while we’re no longer afraid of the dark itself, we still fear what might be “done in the dark.”

Contrary to conventional wisdom, however, good things happen in the dark.  A fetus forms into a human in the dark then emerges into the light to take its first breath of life. Before the cork is popped on a bottle of fine wine, it must first undergo the aging process in a cool, dry, and dark place. A dazzling array of celestial bodies are visible to the eye as they dance across the darkened skies.  Darkness is the cornerstone of any successful metamorphosis.

The dark isn’t just a catalyst for big productions either.  It also plays a role in our recommended daily requirements.   In fact, 7 years ago, in 2009, American Medical Association members voted to keep us in the dark after researching and observing the effects of artificial light.2

The AMA indicated that without darkness,

The AMA voted they would support any efforts to curtail artificial light pollution. They said it would not only save the environment but help earth-dwelling species who need the natural darkness to survive and thrive.

Just as artificial light is weakening our natural abilities; hiding from our fears is causing many of us to become time bombs.

There is an old saying, “what is done in the dark will come to light.”   This aphorism may conjure up a caveat to exposing evil deeds.  Looking at this old saying with new eyes, however, may provide an invitation to present the impetus of our fears before it reveals us in the most unflattering way possible.

Fear is the master of disguise. It may appear to some as butterflies in the stomach; or metallic taste in the back of the throat. It resides in darkness, yet has far-reaching effects.  Unchecked; however, fear controls its host with an invisible hand as a ventriloquist would control and speak for her/his “dummy.”

Except, fear isn’t seeking to control us; it works for us. Fear reminds us:

Fear beckons us to the dark side so we can regain intimacy with our self. In doing so, we remember our agreements we made with ourselves a long time ago or just yesterday.   When we confront our fears, we gain control of our actions. We can decide whether we should honor our covenant or write a new one.

For example, you arrive at the airport two hours ahead of your flight’s scheduled departure. Today is your day to meet with the executive panel of your prospective employer. You and another candidate have made it to the final round of interviews.  It is Thursday morning, May 12, 2016. Hundreds, if not thousands, of travelers, are queued up from Chicago Transit Authority ‘s Orange Line train station – to Midway Airport’s TSA security checkpoint. You are at the end of this line. 3

What would you do?

News media reports of Transportation Security Administration under-staffing at the nation’s airports has littered the airwaves.  Together, you and the other travelers can quickly overtake the few TSA agents on duty.

“F-E-A-R,” a small four-letter word, is keeping you and the others in line, literally. It’s not that you fear being arrested.  You, along with the rest of the obedient travelers, have silently acknowledged the fear of terrorism and anarchy.  The possibility of insurgency, coupled with another 9/11 attack is the architect of this fear.

According to the Survey of American Fears, man-made disasters such as Terrorist Attacks, (44.4%) Civil Unrest (32.0%), Economic Collapse (39.2%) rank the highest in the domain of fear.   When a group experiences collective fear, they are willing to endure a host of inconveniences to protect against those who we believe have refused to abide by a social agreement or rules of engagement.

As individuals, we tend not to be as submissive when it concerns our personal fears. Ranking at the bottom of the domain of terror, on this survey, are those that are personal in nature.

The individual plays host to a fear that remains hidden behind some agreement that no longer serves her. But as long as her personal fears go unchecked, it stands to reason, that she’d be willing to stand on a too-long line to go through a security checkpoint.    She knows she’s hiding something and that means others may be hiding something too.

No one’s afraid of the dark because we have artificial light to hide it. But if by some chance, we really no longer fear the dark; then turn off the lights and enter the darkness.

Our fear is calling, and it’s ready to have a long talk.

CONTENT FARM |
a blog for closet entrepreneurs brainstorming their way into self-discovery and self-awareness to master innovation.